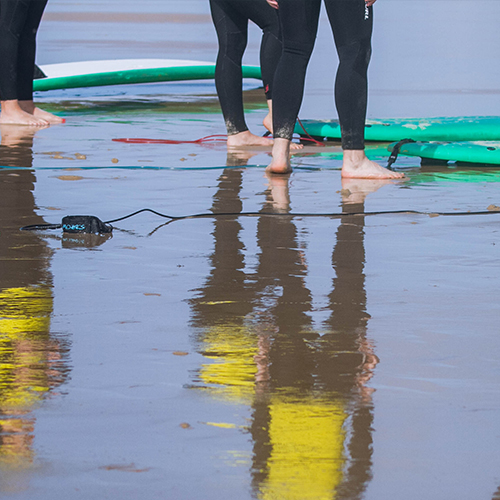 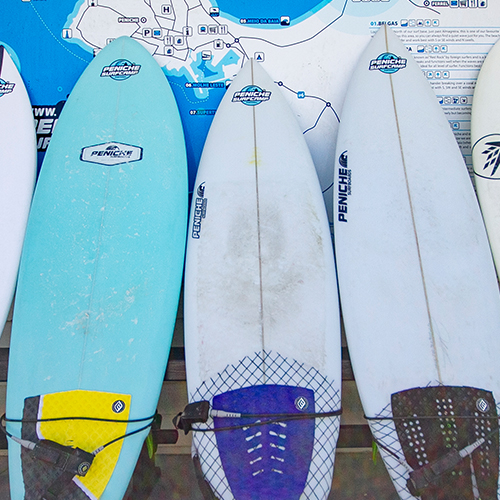 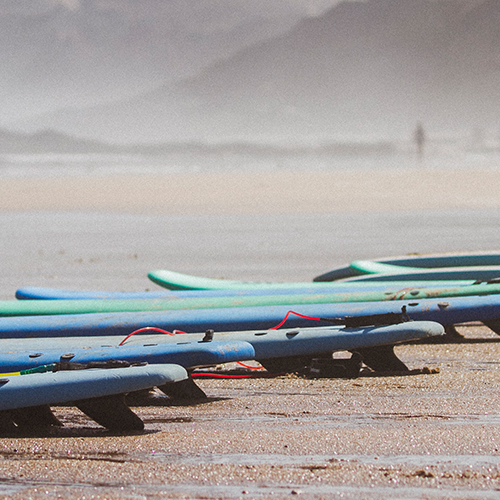 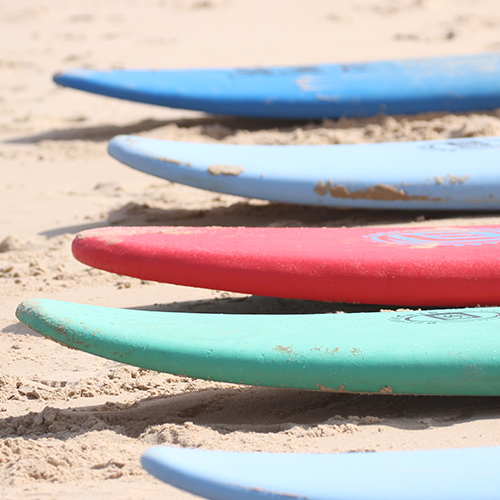 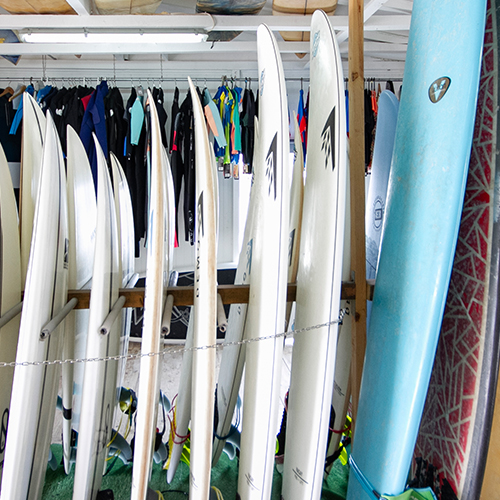 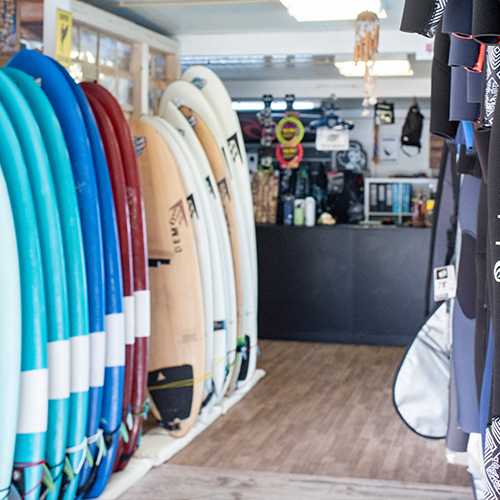 A surfboard is a long, buoyant deck used to surf on waves. They are relatively light, but strong enough to support an individual standing on them while riding a breaking wave. Like the sport itself, they were invented in Polynesia.

Originally made of wood or balsa, the first surfboards were often over 15 feet in length and extremely heavy. The major advances over the years were the addition of one or more fins on the bottom rear of the board to improve directional stability and a change of materials and shapes. Modern surfboards are made of polyurethane or polystyrene foam covered with layers of fiberglass cloth and polyester or epoxy resin. The end result is a light and strong surfboard that is buoyant and maneuverable.

Nose
The front tip of the board. This can be pointed or rounded.

Tail
The back end of the board. The shape of the tail affects how a board responds. Tail shapes vary from square, pin, squash, swallow, diamond, and so on – each one in turn having its own family of smaller variants.

Deck
The surface of the board that the surfer stands on. Surf wax is applied to this surface.

Bottom
The surface of the board that rests on the water.

Fins
Fins create stick and drive on the wave face. They keep the board from sliding sideways on the wave uncontrollably.

Stringer
A thin piece of wood running from nose to tail that increases the strength of the board.

Leash Cup
An indentation in the deck of the board close to the tail that contains a small bar that a leash can be tied around.

Leash
A stretchy cord running from the leash cup to the surfer’s ankle. This keeps a surfer from losing his board when he falls off.

Rocker
This refers to how much curve the bottom of the board has from nose to tail. Increasing the rocker improves maneuverability, but this is at the cost of speed – a steeper curve creates drag.

The modern surfboard fin was developed by George Greenough in the late 1960s. The single fin changed little until the late 70’s, when a second was added and popularized by Australian Mark Richards. The new twin fin set up allowed much more flowing carves to be performed. In 1980 another Australian was developing another set up which would again change the face of surfing. His name was Simon Anderson and by attaching a third fin, positioned centrally behind the twin fins, he created the thruster set up. In the late 90’s removable fin systems were developed. These provided surfers with the ability to alter the riding characteristics of a surfboard, by changing the size and shape of fins used.

Egg
Modern hybrid board (6ft to 8′ 6″) using a more rounded longboard profile and round tail shape. Surfed in smaller waves with any fin set up. Also known as a ‘funboard’ as they are more about having fun then high performance or tricks. They can be easier to ride for beginning surfers and generally perform well in surfing conditions where the more traditional long and short boards might not.

Fish
Radically short stubby board (under 6ft) created in the 1970’s by Skip Frye and popular in smaller waves. Primarily Twin Fin set up with a swallowtail shape.

Gun
Big Wave Board (7ft to 12ft). Thin, needle-like template with Single or Thruster Set up. It usually looks like shortboard but at a longboard size. Used at such big waves spots as Waimea Bay and Mavericks.

Longboard
Primarily single finned with large rounded nose (c. 9 to 12ft) Also called a ‘Mal’, which is a shortened version of Malibu, one of, if not the most popular longboard wave.

Hybrid
(also called Fun Board or Mini-mal) – Based on the longboard’s rounded template, but reduced in size (7 to 9ft) to provide more maneuverability. Either Single Finned or a three fin ‘Thruster’ set up can be used.

Shortboard
The most popular and versatile of the smaller boards. Characterized by a slender pointy nose and generally smaller dimensions. Surfed with three or five fins.

Tow-Board
Very small profiled specialist board with foot loops (c. 5ft) Allows the surfer to be towed behind a jet ski at greater speeds and catch waves not accessible to ‘paddle-in’ surfers. Generally used by the elite in huge surf.

A wetsuit is a protective garment used for watersports. A modern wetsuit is mostly made from thin neoprene. Wetsuits help to preserve body heat by trapping the water that has been warmed by body heat so it cannot escape and take the heat with it. A wetsuit must have a snug fit to work efficiently; too loose a fit will allow water to escape from between the suit and the body, taking the body’s heat with it.

Surfboard wax is applied to the surfboard by rubbing the wax on, rubbing it from rail to rail (side to side), and nose to tail (front to back). After doing several layers in each direction in an area protected from the sun to avoid the melting of the wax, a final coat is applied, rubbing the wax on in a circular motion.